What Do I Do If I Can't Use An IWB Holster? 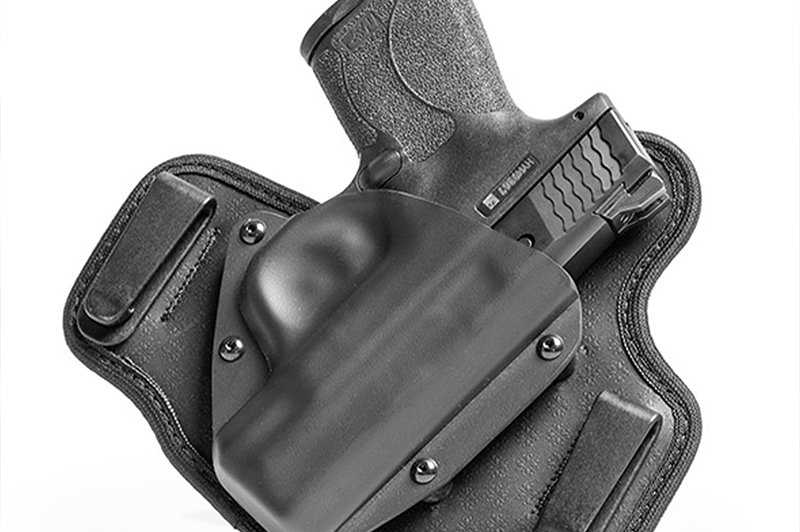 An IWB Holster Is Probably Best For Concealed Carry...But What If You Can't Use One?

There's no getting around it; the best way to concealed carry a pistol is with an IWB holster or, failing that, an OWB.

But what are you supposed to do if you can't?

Why You Might Not Be Able To Wear An IWB Holster 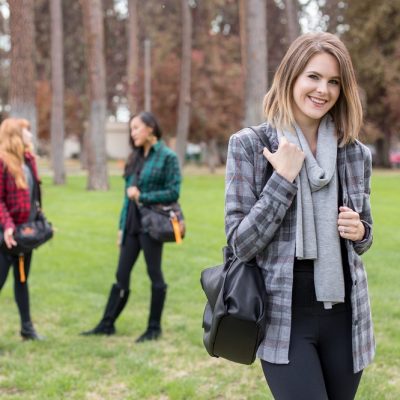 There are a number of reasons why you might not be able to wear an IWB holster. It could be due to the clothing that you normally wear, your natural body shape, or lifestyle factors.

Not all pants are compatible with a gun belt, as most are about 1.5 inches in vertical width meaning from top to bottom. Most men's pants have no problem, but unfortunately women's pants...don't always.

While you could order yourself a few pairs of women's tactical pants, most women don't, can't, or won't wear them all the time.

Sometimes, we're just going to wear leggings. You can't always wear cargo pants to the office. And sometimes, you might want to wear a dress or a skirt for an occasion or because that sundress is just too cute.

It might also be that it doesn't work with your body shape, because it just doesn't for some people.

You might be a working mom and have to carry a backpack a lot, and the straps just don't get along with a holster and gun on the waistband.

Obviously, there are a lot of reasons you might not be able to wear a women's IWB holster. What are you supposed to do if you can't? 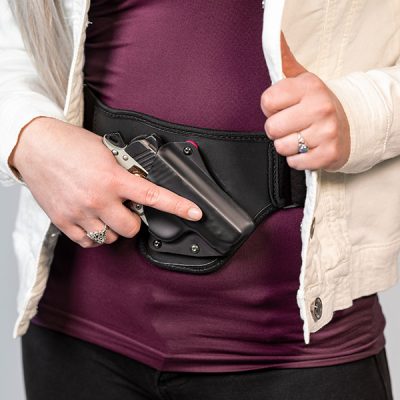 One of the most popular options for women's concealed carry, especially when IWB carry isn't an option, is a belly band holster.

In fact, it's our best-seller.

A belly band holster is arguably the best possible option...provided it's made correctly...as it keeps the gun on the body, but still allows for reasonably fast access. Yes, you give up a bit of efficiency compared to an IWB holster, but more efficient than other carry methods.

One thing to look for is some sort of rigid holster lining or a rigid holster shell. This ensures the pistol is protected while you're carrying.

It's also a good idea to pick a belly band holster that's actually made for the gun you carry. The better the fit, the more reliable (and repeatable!) the draw from the holster, and the gun will be more securely held in place as well.

Remember, a holster is a critical piece of safety equipment. It has to keep your pistol safe and secured.

You should also take care to select a belly band holster that's comfortable to wear, with a good soft padding, or else you'll find reasons not to wear it.

That said, clothing selection is crucial. You have to select a loose-fitting concealed carry shirt, or else it will print. You also need to select a shirt that allows you to get to the holster as quickly as possible.

A top tip is to find a concealed carry shirt or sweater with a false pocket that goes through the fabric. This allows faster access if needed. 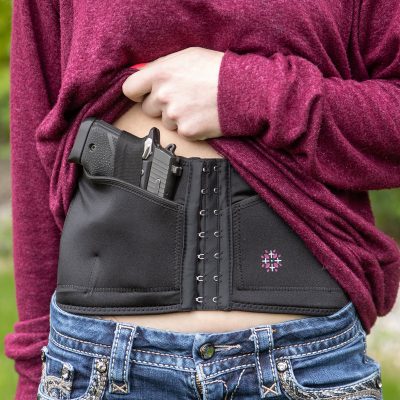 Another option for those who want to carry but can't use an IWB is concealed carry corsets.

Essentially it's the same idea as a belly band - keeping the pistol on the body and under the shirt - but using a corset instead of a simple band to secure it to the abdomen.

Just like with belly bands, this will work better for some women than others; it's just another solution to the problem which may or may not work for you.

Corsets fasten around the abdomen, and provide a slimming contour much like the slimming undergarments we sometimes wear to fit into that pair of skinny jeans (how they torment us!) or sleek LBD that we love.

A corset for concealed carry includes holster pockets, which you slip your gun into.

Just like with belly bands, concealment comes from the top that you wear. You'll need to select a top with a roomy fit for best results.

When selecting a corset holster, look for one that's adjustable. That way you can adjust the fit if needs be.

Also take care to select a concealed carry corset that has a rigid holster lining. The trigger guard must be protected when the gun is holstered; that ensures security while carrying.

The same idea applies to cover garments. A roomy fit is preferred, and a false pocket gives you far more efficient access. Otherwise you have to lift the shirt above the pistol to access the gun, which may be impractical depending on how high on the abdomen you wear the corset.

Again, it might not be the best choice for all women. But it is an option that you can look into. 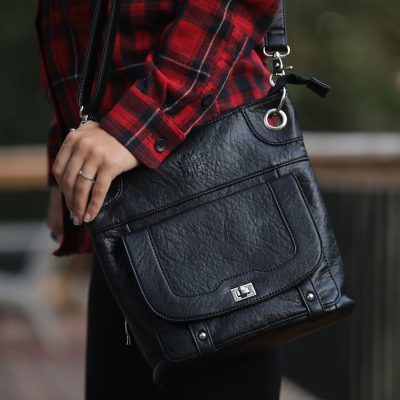 Another option, of course, is to use a concealed carry purse.

However, it has to be acknowledged that carrying a gun in a purse has deficiencies that on-body carry does not. The gun is not secured to you; it's in a bag, and that bag can be dropped, set down and forgotten, stolen, or gotten into when you aren't looking.

That's a hazard, if not properly managed.

It's also the case that drawing a gun from a concealed carry purse is, even at best, less efficient (and therefore slower) than an on-body method of carrying.

With that said, there's a way to make it work if it's all you have to work with or are only carrying in your purse occasionally. If you're going to carry in a purse, it's imperative to do so correctly so you can be safe in carrying it as well as effective in case you have to draw from your purse.

For starters, make sure you get a purse that's actually made for carrying.

There should be a dedicated holster compartment, ideally on the outside of the purse. It should have an actual holster in it, and the compartment should have some sort of closure such as a zipper or a very strong snap.

The gun cannot be carried in the purse with any other items in the same compartment. The trigger guard must be protected, and the gun must be secured for safe carrying.

You want to sling the purse across your body. That way, it's tethered to you rather than hanging from the shoulder. You should be able to easily reach over and get to the holster compartment if needs be; the purse shouldn't be too high or too low for fast access.

Again, a concealed carry purse can work...but you need to use one correctly or else you're taking chances with your safety. With that said, it can work if it's all you can work with or if you're using it as an alternative carry method when you can't carry on the body.

Other Ways To Carry If You Can't Use An IWB 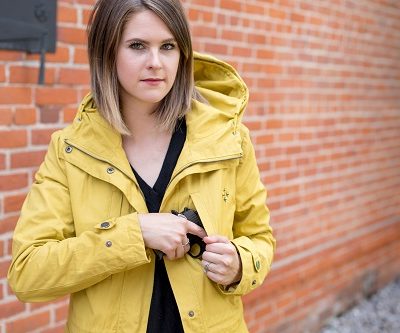 There are some other ways to carry if you can't use an IWB holster, but as you can probably tell, you start adding additional compromises in terms of efficiency and other factors.

In other words, the further away you get from a holster on the waistband, the more deficiencies you have to worry about in terms of how well that carry method works. The question at some point becomes what problems you want to live with.

Ankle holsters are one option. Classically, these are for an auxiliary pistol in case your primary gun fails or you can't get to it. The reason is that getting to a gun on your foot is a lot slower and difficult to do if your attacker is right in front of you.

Fine for a backup to a concealed carry gun, but it's not the only carry method you want to use.

Some people will carry a gun in the pocket, which SEEMS like a solid solution but also has problems.

You have to carry with a pocket holster, or in an article of concealed carry clothing that has a holster pocket with a rigid lining to protect the trigger.

Certain handguns are really not well suited for pocket carry, such as small single-action semi-autos given the controls. Also, accessing a pocket pistol while sitting is difficult if not impossible, so it isn't as functional as other carry methods.

Bra holsters might seem tenable, but - for obvious reasons! - will only work for some women. We don't want to seem indelicate but too little...material, we'll say...and concealment will be difficult, too much and it interferes with the ability to get the gun out quickly.

They also don't work well, because it's darn hard to get under your shirt, drop the gun out of your bra holster, and then get it out and on target. You're certainly likely to have a wardrobe malfunction, though that's likely to be the least of your worries in that instance.

A fanny pack has all the benefits of purse carry but with fewer drawbacks given that it stays on the body...but all the aspects of potential security risks are still there. Selection of the fanny pack is likewise critical for safe, effective carry.

You'll also be wearing a fanny pack. The 90s called, and they want their stuff back.

Shoulder holsters are also out there, but they require a jacket at all times for concealment, aren't always the most comfortable and the draw can be awkward. Far more people own shoulder holsters than actually use them, and those are the reasons why.

Again, there are plenty of reasons why you might not be able to carry your gun in an IWB or OWB holster, either occasionally or at all. There are some ways to do so, but choose carefully. Every carry method is choosing a set of problems, so pick the ones you can deal with.