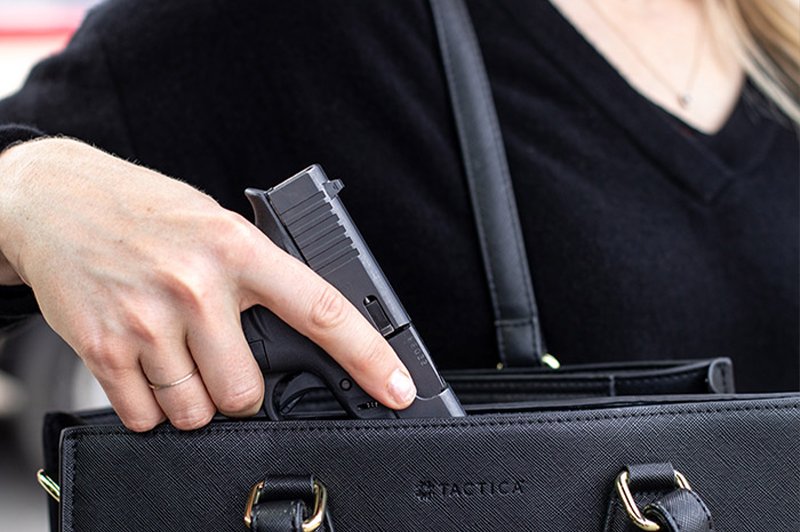 Gallons of ink and miles of page lines have been written about guns for women's concealed carry. Most of it...is absolute drivel. It's either not true at all, or based on cliches that need to be retired.

Here is the truth:

That might seem to run counter to what some people have said, or certainly what you might hear from some people in gun stores...but remember that a gun is a tool. Any tool, for any task, either makes your job easier or harder.

The tool that makes it easiest for you do your job...is the best one. And that has nothing to do with the gender of the person using it.

A Good Women's Concealed Carry Gun Should Be A Good Fit For a gun to be a good fit for you - or for ANYONE, whether it's for women's concealed carry or otherwise - it should be suited for your hands. There's no point putting a pistol in an IWB holster or concealed carry purse that makes hitting the target harder for you.

With that said, "reliable and accurate" isn't the highest bar to clear. The fact is that you have choices as the consumer; it's one thing if you're in the army or join the police and have to take whatever they give you, but you can choose something that fits you better.

First is the fit in the hand. The shape and texture should feel good to you. You should be able to get a high, tight grip on the good without issue.

But what you really need to pay attention to is the trigger reach, or how far your finger has to reach to touch the trigger itself. Your finger should be able to contact the trigger without having to stretch out to get it or curl your trigger finger back too far, either.

In other words, the gun should feel like you can easily use it. You should be able to easily point it and pick up a target in your sights.

The idea is that the gun should help you get to work, rather than you having to work to use it.

Sure, there's something to be said about being able to make any gun work and that's definitely a good thing, but - again - you have choices and can get a carry gun that suits you, rather than having to just take what someone else gives you. Get A Holster For EDC, The Range Or Both

A gun for women's concealed carry - or indeed, for anyone - should also be a good fit for them as a shooter and otherwise fit into their lifestyle.

Here's what that means.

A lot of older guys - the ones that probably call you "sweetie" or "little lady" - think a J-frame or tiny .380 is a good fit for most women...and they just aren't.

A lightweight double-action revolver, even in .38 Special, can have harsh recoil. A double-action trigger is not easy to master for most total beginners - of ANY gender - and tiny sights with a short sight radius (distance between the front and rear sights) is not easy to shoot accurately.

Then you have some of the older service pistols.

1911 pistols are large, unwieldy, and take a lot of practice to master use of the controls...especially the manual safety. It is not a good gun for beginners...and the same thing applies to micro 1911s from Kimber, Sig Sauer and Springfield.

A Beretta 92FS, the classic big double-stack 9mm pistol, also has a control scheme you have to practice to get down. The large grip housing and long trigger reach make it very hard for people with small hands to shoot.

Glock pistols are everywhere, and have a simple manual of arms, as are pistols of similar design. They're easy to learn, they're usually reliable and accurate, and do make good guns for beginners.

However, the lack of any safety device other than the trigger safety means you have to be very, very careful in carrying and using them. Lots of mishaps have happened when people forget that and don't respect the gun they own.

That doesn't mean 1911 pistols or Beretta 92s or Glocks - or other striker-fired pistols - aren't good guns. 1911s, Berettas and Glocks are the most proven fighting pistols in the world. But it's also the case that they aren't necessarily the best choice for everyone.

What this means is you want to pick a gun that suits your skill level.

It's also important to choose a good gun for the intended purpose.

The aforementioned guns are great fighting pistols for soldiers or police, but aren't great for concealed carry; they're large, heavy and not the easiest to conceal, so not great choices for those applications.

The classic struggle is finding the smallest gun - so it's easy to carry - that's easy to shoot really well. It's different for everyone; some people find a gun like a Glock 19 is a happy medium, and some people find they slim down even further to, say, a Smith & Wesson M&P9 Shield.

No Matter What Gun Or Gear You Get, You Have To Train With It Holsters For Concealed Carry Or The Range

Whatever your choice of carry gun or holsters or what have you for women's concealed carry, you also have to train with it.

Training and practice are absolutely necessary. As the old saying goes, owning a guitar doesn't make you a musician and just because you own a gun doesn't mean you'll be able to use it effectively enough to save your life.

For one, if you made a poor choice of gun or holster, it's going to show in your results. Failures in training tell you what, if any, deficiencies you need to address in what you're carrying.

For two, it is in training and practice that you put in the repetitions necessary to become efficient enough and proficient enough to use your gun in self-defense, should you ever have to.

If you're starting at square one, get some professional instruction. Take a beginner's course to get yourself the basics of safe gun handling. Get some training in marksmanship and practical shooting.

Also take time to get educated on the legal aspects of self-defense, including both the letter of the law and the concepts behind it.

Getting a good carry gun and a good women's concealed carry holster is one part of the equation. They are only the tools, and it's the craftsperson behind the tools that determine how well they're used.